An Interview with Author Ronn Perea 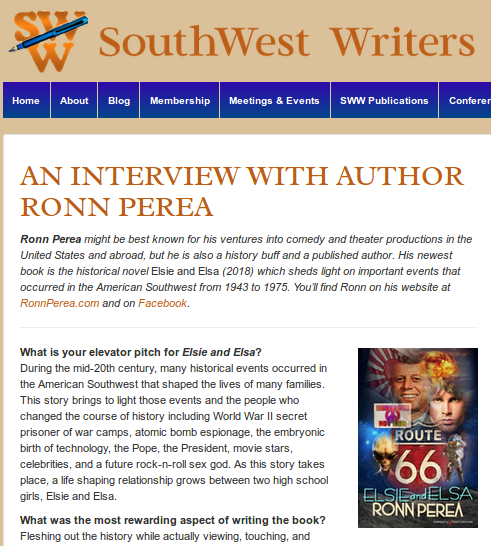 Ronn Perea might be best known for his ventures into comedy and theater productions in the United States and abroad, but he is also a history buff and a published author. His newest book is the historical novel Elsie and Elsa (2018) which sheds light on important events that occurred in the American Southwest from 1943 to 1975. You’ll find Ronn on his website at RonnPerea.com and on Facebook.

What is your elevator pitch for Elsie and Elsa? During the mid-20th century, many historical events occurred in the American Southwest that shaped the lives of many families. This story brings to light those events and the people who changed the course of history including World War II secret prisoner of war camps, atomic bomb espionage, the embryonic birth of technology, the Pope, the President, movie stars, celebrities, and a future rock-n-roll sex god. As this story takes place, a life shaping relationship grows between two high school girls, Elsie and Elsa.

What was the most rewarding aspect of writing the book? Fleshing out the history while actually viewing, touching, and feeling it.

Tell us a little about your main characters. Elsie and Elsa were my mom and her high school friend. Historical events occurred around them that they were unaware of as the events happened. Elsie and Elsa would later be a resource as witnesses to these actual occurrences.

Do you have a favorite quote from the book you’d like to share? I’ll paraphrase from the New Mexican 200th and 515th Coast Guard Artillery groups who were the first to shoot down Japanese planes on December 7, 1941 (the same day as Pearl Harbor). This time our guys were not surprised when the Japanese started to attack them in the Philippines. During the next four months, as our cut-off troops were using up their last bullets and eating their last slices of bread, newspapers back home were calling them The Battling Bastards of Bataan. When 70,000 Americans finally surrendered and were forced to march the infamous Bataan Death March, our boys were resigned to their motto, “No Mama, No Pappa, No Uncle Sam.”

How did the book come together? Elsie and Elsa took ten years to compile, write, rewrite and edit. When about to be published, I discovered new facts that I had to include. It took another year before the book was ready for publication.

What first inspired you to become a writer? As soon as I was out of college, I wrote my first novel. It’s now collecting dust somewhere.

Looking back to the beginning of your writing career, what do you know now that you wish you’d known then? I have realized that it helps to write about what you know. The intimate details are easier to describe.

Who are your favorite authors, and what do you admire most about their writing? Ernest Hemingway. Action with historical. Do I need to say more?

What is the best encouragement or advice you’ve received on your writing journey? Never give up. Explore all options, some will always work for you.

What have you learned as a comedian that has helped you with your writing career? As a show biz producer of stage presentations, it’s simple. Start with a strong opening that leads to a solid middle that leads to a killer ending.

What writing projects are you working on now? My next novel is about baseball. Not about the star home run hitter or the star pitcher. But when was the last time you read a story about five generations of a family of umpires? It starts in the future and goes back to the beginning of townball and how it migrated west. And how in 1880 the Atchison, Topeka and Santa Fe Railroad brought it to Albuquerque. 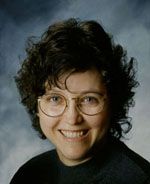 KL Wagoner (writing as Cate Macabe) is the author of This New Mountain: a memoir of AJ Jackson, private investigator, repossessor, and grandmother. Kathy has a new speculative fiction blog at klwagoner.com and writes about memoir at ThisNewMountain.com.